Wet Nurse - // historically, a woman employed to suckle or breastfeed another woman's child

It was not a new concept when introduced in America during times of black enslavement. Places across the globe engaged in wet nursing because some mothers could not breastfeed or produce milk.

In the United States, enslaved black women were exploited and forced to be wet nurses to their slave owners' children. Sometimes, the women could breastfeed both their child and the owners'. Sometimes they had to designate a specific breast to the slave owners' child and one to their own. In the worst-case scenario, they had to neglect the needs of their child and provide other forms of nutrition to them. This further increased the black infant mortality rate.

Now you may ask, why not just breastfeed your own child if you can? The situation became more of an issue because black women were of a lower class, therefore lower-class women should only breastfeed. Breastfeeding was seen as a demeaning act that only the uncultured and poor were expected to do. Classism and capitalization of the black woman's breast milk contributed to the high deaths of babies in the slave trade and further exploitation of black women.

Okay... so with all of this history, you're probably wondering why is this important now? Something key I've learned is that we are not disconnected from history, but it shapes the present. Breast milk is the golden liquid for babies with the perfect amount of protein, carbohydrates, fat, vitamins and minerals. Breast milk also contributes towards immunity, brain development, builds a bond between the baby and mother, is good for the mother's health, and the list goes on. With these FACTS today, Black women breastfeed their babies at a lower percentage rate than white women do in the US (the gap is getting smaller, thankfully). In Canada, Indigenous women initiate breastfeeding at a lower percentage rate than Black, Asian, and white women. 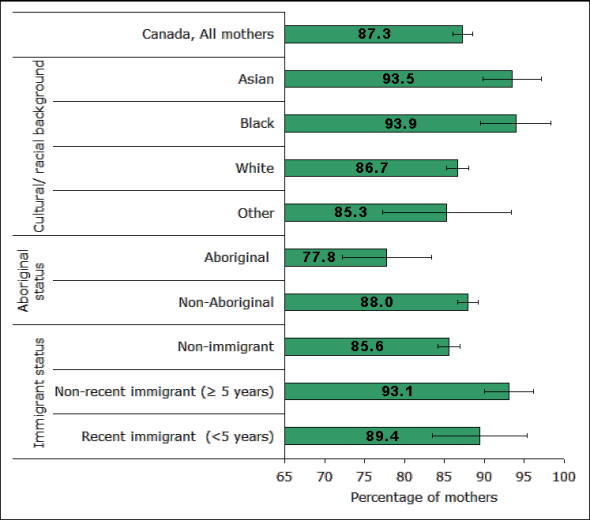 Other barriers to breastfeeding include and are not limited to:

It's important to continue promoting that women breastfeed their babies for the first six months of life. It is also important to address and reduce barriers that minorities may face. Improving the health of babies and mothers has long-term effects, and it is our job not just as dietitians to work on these efforts but also as a community to advance the community's health.

Below are some initiatives and committees that focus on promoting and addressing barriers women face when breastfeeding.

"Black Breastfeeding Week was created because for over 40 years there has been a gaping racial disparity in breastfeeding rates. The most recent CDC data show that 75% of white women have ever breastfed versus 58.9% of black women. The fact that racial disparity in initiation and even bigger one for duration has lingered for so long is reason enough to take 7 days to focus on the issue."
"The BCC is a registered not for profit organization dedicated to the protection, promotion and support of breastfeeding and the implementation of the Baby-Friendly Initiative (BFI) in Canada."

Black Seeds - It comes from what? Fennel flowers...

Okra; That Slimy Stuff in your Stew